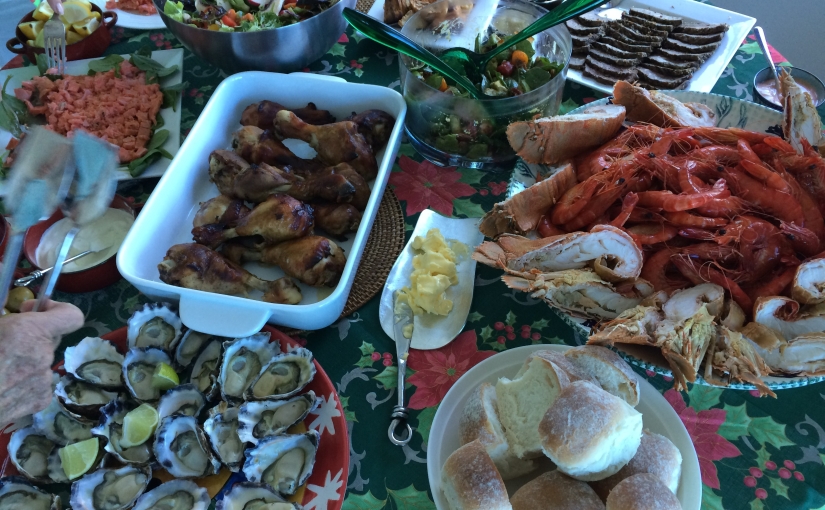 ‘I have a love-hate relationship with Christmas,’ one friend says at the wise-old-birds meeting we hold once a month. While we feast on sponge cake with cream, strawberries dipped in chocolate, rocky road and fruit mince pies, we discuss such important matters of the world – our world. Looking at this indulgent spread, I couldn’t agree more!

Each one of us takes turns in re-living our best and worst memories of Christmas. When we get half-way through the group, someone declares, ‘No one really likes Christmas. It’s always a debacle.’

This is countered enthusiastically by another who says, ‘That’s not true. There are people that like Christmas and have normal Christmas gatherings. We’re just from dysfunctional backgrounds.’

I look sideways at my friend, you know the way you do when you don’t turn your head? We’re all getting a bit red-faced. Someone else pipes up, ‘What’s normal?’ Maybe the meeting is getting out of hand. It must be all that sugar. Or pink champagne.

The question remains; what’s normal? I don’t know many people like that. Or Christmases. (Even that word looks abnormal.)

Maybe, it’s just Christmas in Australia isn’t normal. We’re all too hot and we’d rather be swimming. The flies, swarming in through open windows, litter the prawns and potato salad, looking like tasty currants until swatted away, to be swatted away again every three seconds. We’re too irritable to be joyful.

The conversation of the group settles when one woman declares her Christmases have always been nice. Okay, there is hope! But I don’t remember what she said next. I only remember the bad stuff. Which was sometimes quite funny. But usually a bit sad.

Best and worst Christmas presents was a safer subject.

There was much laughter over the worst, but sadly, the worst was tainted by malice, lack of thought or ineptitude. (Ineptitude: haplessly incompetent – don’t you love that?) For example, a plain pair of socks to each child, every year, from an aunty. A bolt of cloth, also to a child, the colour of baby poo. Toe separators and Russian Matryoshka Nesting Dolls.

The best presents were delightful: a holiday organised by a husband including a babysitter to stay at home with the children, a doll’s dress made by mother but ordered by Santa, a bathing suit of aqua and pink, a home-made letterbox designed like a ladybird, and mine – a giant fur koala.

For me, there’s one definite highlight to Christmas. And that’s the pudding: fruity and rich with a dob of brandy butter and lashings of vanilla pouring custard.

The conversation left us with full heads of memories and hearts full of emotions. We decided that trees, decorations, pre-Christmas gatherings, families and friends getting together (despite the drawbacks) and Christmas food, made it all worthwhile.

Having eaten more than my share of special afternoon tea, my belly felt like it was getting a practise run in for the day when we don’t stop eating. That’s Christmas. It should be called Indulgence Day.

5 thoughts on “Christmas Cheer or Cheerless”