It’s nine months since I made and enacted my last decision as master. Those of us that love dogs say our dogs are our fur-babies or our dog’s human, as if they’re our equal, but they’re not. If you’re like me, you treat your dog as your companion, a cherished member of the family or your favourite living creature on earth, but your dog is still not your equal. They’re nearer to being a dependent child or reliant best friend. As its owner, you are fully responsible for your dog’s happiness: its comfort, its health, its exercise, its mental well-being and its love. You are responsible for its life – and its death.

I took Chopper, my last dog, the handsome, seal-eyed, chocolate Labrador, to the vet on the afternoon of 20th March this year. I say my dog because that’s the way I felt, although I know that he had a family, my family. His two fur-brothers accompanied us. It had been a hard decision to make; harder than I knew. You see, I understood that he was suffering, and I gave him lots of drugs to ease his pain. I modified our walks and hugged him as I lay next to him on the floor. But I still thought he was happy. He always seemed eager to go out, lifting his head attentively and wagging his tail when I asked, ‘Do you want to go out?’ His eyes followed me around a room. He sat on my feet when I was still. But some days he could barely go out to wee. He could barely get up. Or he’d throw up.

My sons helped as much as they could and one day, as I broached the subject of the imminent end, they said things that indicated they already knew and they were waiting for me to accept it. I suggested we wait another week, until after the Easter break, so that Chopper and I could have quality time together in our holiday house down the south coast, a place he loved. ‘He’s still happy,’ I said, ‘so it makes it that much harder.’

Then one son said, ‘He’s not happy, he’s only happy when you’re with him.’ I was shocked. I asked the other son what he thought, and he said, ‘It’s not a dog’s life!’ I suddenly felt so sad. And selfish. My desire to keep him by my side had affected my judgement and my reality.

My sons carried him outside for his pre-bed wee, a time, not long before, we cherished as an end of day ritual: fifteen minutes walking, out in the darkness and quiet, Chopper sniffing all the night-time scents and me looking up to the moon and stars. He sat there. He couldn’t even get up to wee. I hugged him and cried. I buried my face in his furry neck and said I was sorry. I was so afraid to lose him, to no longer have the comfort of him, to be on my own.

I’d been his master for over eleven and a half years. He’d been my companion, pal and confidante. I rarely walked him on a lead. I rarely roused on him. He’d joined in the fun of the family, guarded us and looked after the emotional needs of each of us. He’d chased remote-control monster trucks, swum in the sea, supervised barbecues, romanced other dogs (putting it politely), played chasings and tug-of-war. 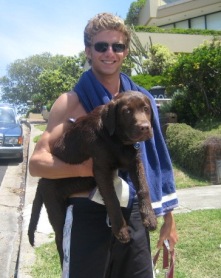 He’d travelled with me in a motorhome, never tiring of exploring, resting by a lake or meeting other nomads. He’d consoled me when I was sad, willed me off the lounge at night, and wagged his tail every time we made eye contact. He lay on my feet when I was writing. He didn’t feel like my equal; he felt like a soul-mate.

And for my soul-mate, I had to put his needs before my own. I had to do what I could do as his human and ultimately, his master. I could give him peace.

And nine months later, I can tell you about it.

4 thoughts on “A Final Act as Master”

Predominately Books But Other Stuff Too