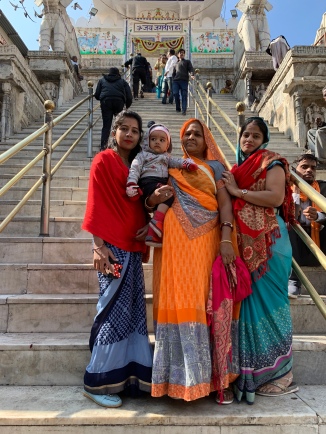 Just because I feel like a local in Udaipur, India, doesn’t mean the locals think I’m one!

I’m at ease here, relaxed and bouncy as I walk the alleyways and say Namaste to shopkeepers. I smile and they return the grin. My head wobbles in reply to theirs, a conversation in itself. But I know I stand out. They’re looking, watching to see what I do, hoping I’ll stop to buy or give them a chance to talk about the cricket or tennis. They love us Aussies! They’ve all got a relative or an Australian story.

When I sight-see like a tourist, I mingle with the Indian tourists. They’re having a good time, always: couples, young families, extended families. Their language is soft. They chatter and laugh. We admire each other, for once again, I stand out. Sometimes I ask, may I take your photo? The girls pose, just like in any other part of the world. The men proudly hold their children – and the kids are so cute! But they often approach me first: can we have a selfie? I always oblige and grin at the camera. I’ve even been passed their toddlers for a special photo, as if I’m royalty.

I’ve been to two pujas, Hindu prayer ceremonies. I like to integrate and immerse myself in the culture and I’m rewarded for my efforts. I buy a garland for 50 rupees ($1), a tiny price for such an intricate floral work. I take it up the stairs, leaving earth behind, and barefoot, enter the temple. I sit on the floor, cross legged and try to get comfortable. I return the looks of worshippers and smile. They smile back. I copy their actions and stand when they do. I clap and line up to give my offering and accept the holy rosewater in my hand. I act like I sip it but I don’t. I do pour it over my head and run it through my hair. I enjoy the bells, the chanting, the drum and the finger-cymbals. And the people love that I’m there. I can see it on their curious faces. When I go outside, I get the rock-star treatment. Grown men are the most bold: can we have a selfie? What can I say but, of course!

Cows are sacred here and roam the streets. In some areas, there’s too many and I feel sorry for them. They’re thin and eat rubbish – literally; I saw a calf eating a cardboard box. People throw out food scraps for them but it can’t be enough. Here in Udaipur, though, they look okay. Today I saw a pile of chapatis in a feeding spot. I touch my fingers to my lips and pass the kiss to the cow, as I’ve seen locals do. I wish it well! It doesn’t look too sure!

It’s harder for me to cope with the dogs. There’s so many street dogs and hierarchy is everything. The tough ones, the intimidators, get the little food that there is. Small fights can be heard too often. Last night I was watching a dog from the steps of the temple. He was pressing forward onto the street, clearly terrified, with his tail wrapped firmly under his bottom. He started to bark at nothing in particular, but facing the traffic. I so wanted to comfort him but didn’t dare.

This morning I took the toast from my breakfast in the hope that he’d still be there and I could offer some kindness. He was curled up in the sun on a platform at the temple. I broke the toast and handed him a piece, moving and speaking as gently as I could. He was looking at me dubiously when a beggar-child approached. She looked at the toast and pointed, then touched her mouth. I understood this language and asked, do you want this? She looked back to her mother who was sitting on the steps. The mother nodded at me. I handed it over. A man came over and softly said to her, thank you. She turned to me and said it with a smile. I was glad to give her some coloured pencils and notepaper I carry for this purpose, as well. The vast difference between me and that child’s mother does not escape me.

Fortunately, beggars are greatly reduced in this country. The prime minister, Mr Modi, is doing a fine job. Education, including the removal of false teachers, health, including free care for those on the poverty line, jobs, including bringing in villagers to clean up the roadside rubbish, and free food from vans parked around the hospitals, are all a part of his programme. Let’s hope he gets voted in again, despite the corrupt forces gathering strength to get him out and renew their own power. See, I’m even interested in the politics! I really do feel like a local!

But my time here is temporary. I’m an observer and I’m observed. I’ll never know what effect I might have on someone’s day or path, just by the interaction. And vice versa!

Predominately Books But Other Stuff Too